As I’ve told Bob a bunch of times on the BeanCast, the Tour de France is a promotional vehicle. Yes, it’s a sporting event (and one I hold near and dear to my heart), but it’s also a grand way for companies and brands to get their name out there and connect with a very qualified audience.

Trouble is, the folks using the Tour to market are not really following the first tenet of content or communication – KNOW YOUR AUDIENCE. 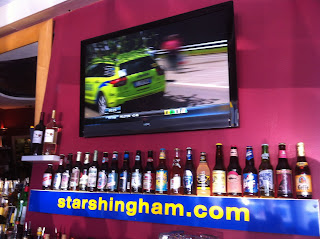 I’ve seen more ads for stuff that just doesn’t fit with a cycling-fan demographic this year and I think we’ve reached the point where it’s now just a ‘throw-stuff-at-the-wall’ practice. Kinda sad, but was bound to happen as all branding people try to get ahead.

That said, here’s the result from Stage 1 and some thoughts on the Tour so far…

1 – The pack is jittery – as happens in the first three or four stages of every Tour de France. Hoping that crashes don’t know any of my favorites out of the race. As you saw within 25KM of the finish on today’s stage, there were two big crashes. First one had four or five riders down. Second had about 15-20 riders down.

2 – There are really just two teams in the hunt for the Yellow jersey in Paris in a few weeks. These are team BMC and team Sky.

3 – I love how Phil Ligget says ‘movie star’ when he pronounces Movistar.

4 – At 8KM (after 190KM of a breakaway) the peloton got all back together. Five mere miles from the finish line. When you watch the stages, I urge you to pay attention to the jockeying for postion within the last 3-5 miles of each stage. It really is a chess match.

5 – Amazing finish for this stage – a mad sprint uphill to the finish – AND I’m astonished that Fabian Cancellara of team has kept the Yellow Jersey! Peter Sagan of Liquigas- Cannondale won the stage, but Cancellar came in second and the rest of the peloton was just behind.

Great stuff. I thought the pack would break apart today and once again the Tour de France is a learning process for me.

OH! By the way. If you’re DVRing the stages for watching later, do yourself a favor. Add 10-15 minutes to the end of the taping so you don’t miss the end of any stage. OR set your DVR to record the second or third broadcast of the stage. As this is a live event, the number of times I’ve missed the last three minutes of a stage because my DVR stopped is numerous. I’d say it happens at least half a dozen times in the course of a Tour de France.

Thanks for reading. I welcome your thoughts!