What’s for lunch? I’ve heard that for years – more so when we were in a full production schedule for NomX3 – but I still hear it today from people who want to know what’s on my plate. Well, the other day I got three plates and they were all interesting, inspiring and tasty.

Let’s get to the essentials…

Where – I scooted over to All-Star Sandwich Bar in Cambridge. You can find them online and on Facebook and Twitter. They’re at 1245 Cambridge Street in Cambridge and their phone is 617-868-3065. 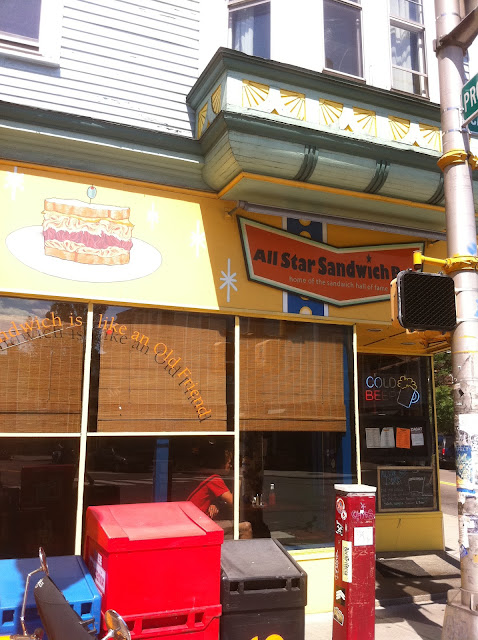 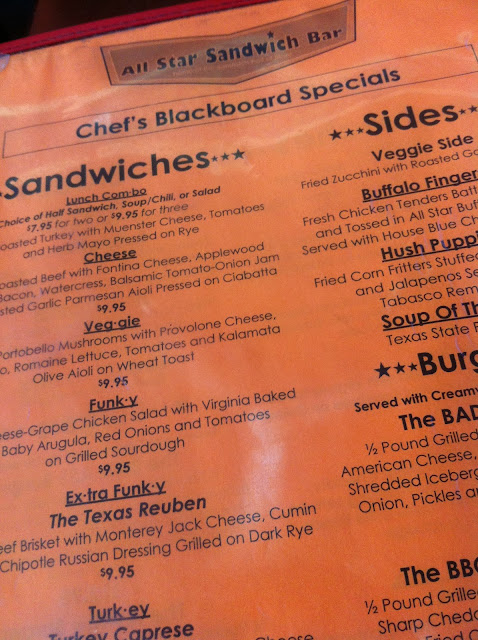 What – Lunch – of course. I was there to try some sandwiches. Especially because Mike Langford is always crowing about how he knows the world’s best five sandwiches. I want to join him in making a ‘best-sandwich’ list.

Why – The real reason behind the visit was a call from a restaurant rep who wanted to tell me about the newest offerings at All-Star Sandwich Bar. She said they were doing street food with a twist. Putting great tastes between some bread and selling it at the restaurant. Turns out, the sandwiches I tried the other day were none of the new ones (although see below where I pasted a description from her email).

Who – I sat down with executive chef and co-owner Johnny Diamantopoulos. He insisted that I try three sandwiches, but let me choose. He and his brother Kosta have been running the store for three years and they’re loving every minute of it. In fact, Johnny is enjoying it so much because his position as chef allows him to “give people some great food” made of quality ingredients and “integrity”. 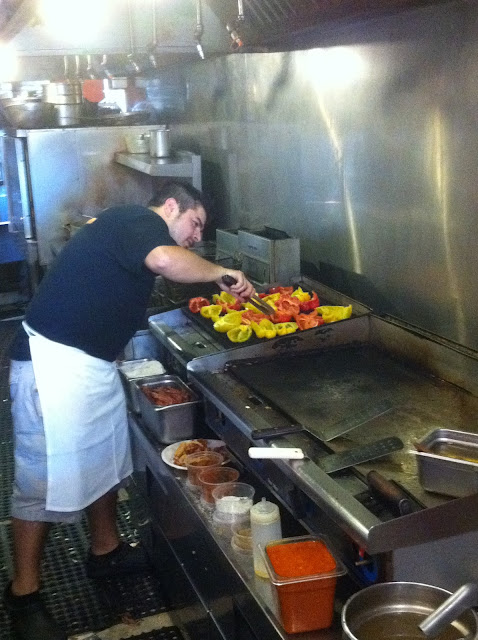 So, let’s get eating.

When I walked into the shop I noticed beer taps. That’s right. Even though it was lunch, I was very pleased to see BEER on the menu. What is a good sandwich without a cold, crisp beer? I went with iced tea for my lunch beverage, but I vowed to return and sample the beers.

In an active dining area with about 15 tables, you can hear the music playing and chatter from behind the sandwich counter. Folks return regularly and definitely have their own favorite sandwiches. On a menu that boasts a couple dozen offerings – and a daily special sandwich each weekday – there’s plenty to get your attention.

What got my attention was the Atomic Meatloaf Meltdown; the Cubano; and the Cheese sandwich. Here’s their description (from the menu) and my take on each. 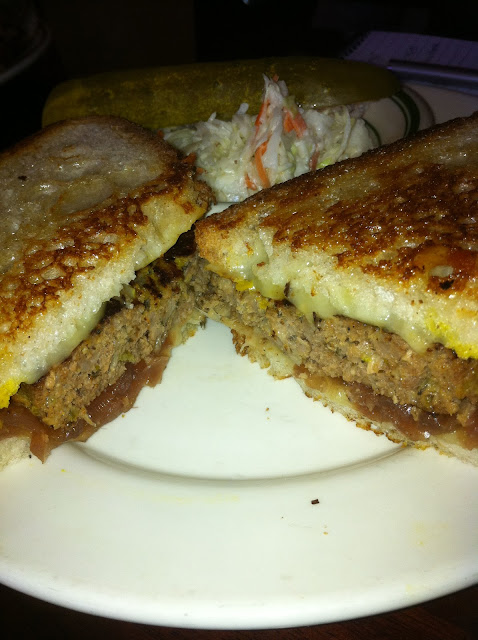 This is now in my top five sandwiches of all time. The meatloaf was thick, but even with the grilling it broke apart nicely and was definitely meaty. There was just the right amount of cheese and the grilled bread gave me a tasty vehicle on which to taste the entire symphony of food. What I really liked best about this sandwich was that the hot sauce and the jam played nicely together and gave my mouth a little tingle. Certainly not overpowering, but complemented the meat perfectly. I think that this is a sandwich that combines both some soul and some comfort. I know it did for me. 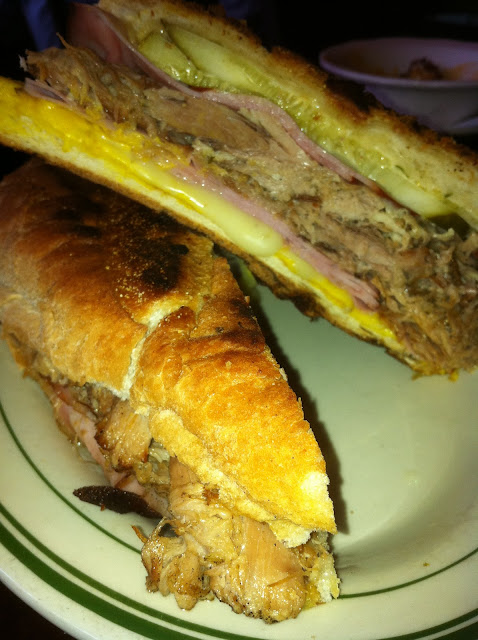 It was messy and overstuffed. If you’re used to getting a Cuban that is a thin tortilla with scant amounts of meat, this isn’t it. There was enough pork on that sandwich to make a second sandwich if I’d been so inclined. The pickle was sliced lengthwise and the mustard and aioli were slathered on. While I resorted to eating it with a knife and fork, it was perfectly balanced from a flavor perspective. The one thing I might have looked for was a little bit seasoning on the pork, but the salt of the ham and the vinegar of the pickle and tang of the mustard made up for that. 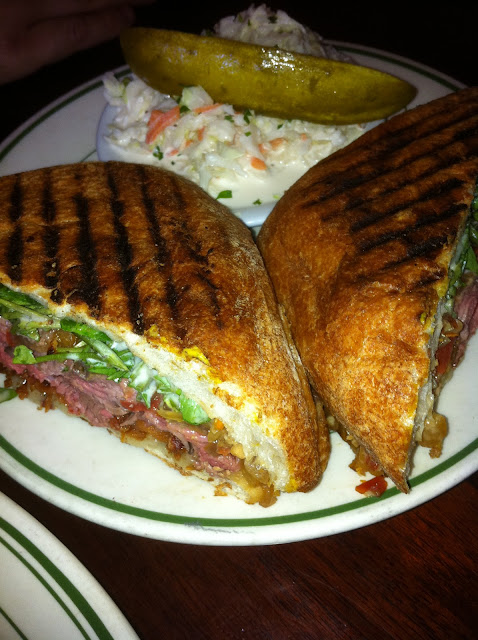 Here’s where I got confused. When talking with Johnny, I selected the Cheese sandwich and he immediately asked if that was too much meat for me. Especially because I had meatloaf, the Cubano and then this sandwich. I said no, because when reading the menu I thought a cheese sandwich was like a grilled cheese. Not so, mon frere. The cheese sandwich at All-Star is like a roast beef sandwich with the works. The taste was great and the roast beef was done just past medium rare (great consistency), and the cheese and jam definitely come to play. It’s maybe best compared to an upscale steak and cheese.

Essentially, something Johnny said to me when I first arrived made total sense when thinking about how these sandwiches were crafted/developed. He said his style of cooking starts with a passion and comes from the heart (so he’s thinking about ingredients and the sandwich concept), then it goes to the mind (because he has the imagination to put a new twist on old favorites), and then to the hand (which is his skillset of combining ingredients for balance and taste).

Each of the sandwiches I had met that description and I was pleased to have had the opportunity to have a lunch at his restaurant.

The side for each sandwich was a tiny bowl of cole slaw and a pickle. Both were fresh and crisp.

I didn’t have the fries, but they looked good and easily 50% of the diners ordered them, so they must be a favorite.

I saw Poutine on the menu. Made me smile.

Johnny brought out a buffalo chicken finger that was tender and tasty. The sauce had a hint of honey and enough heat to get your attention, but not too much to run your taste buds. I thought the sauce would be great on a pulled pork sandwich. Maybe next time. 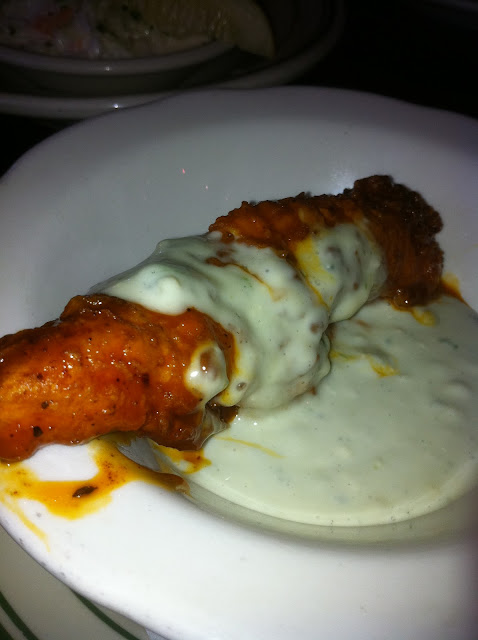 The store gets big points for staff attention, beer taps and inventive sandwiches.

The store loses a half a point for the combination of location (not anything they could change now) and the price of a sandwich. Each was around $9 or $10 before adding fries and/or a drink. That puts your lunch bill around $18 a head after tip. While it’s worth the price, I felt I should mention it.

Here’s that info on the other sandwiches and another photo of Johnny and the kitchen crew. 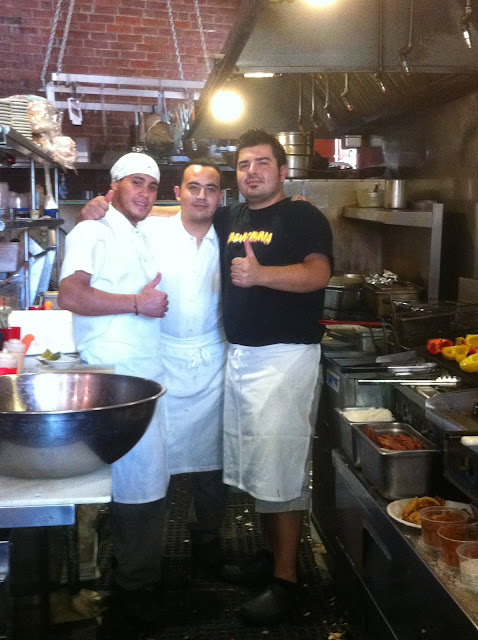 Where do you want me to go next? Leave your notes in the comments – and follow me on Twitter at @BostonFoodFan.