This evening I had the pleasure of being invited to a Boston Food Bloggers’ event at Tastings Wine Bar & Bistro in Foxboro, MA.

The dinner – a four-course extravaganza with dishes all made with coffee or coffee derivatives – was arranged by Green Mountain Coffee Roasters and I was a last-minute addition. 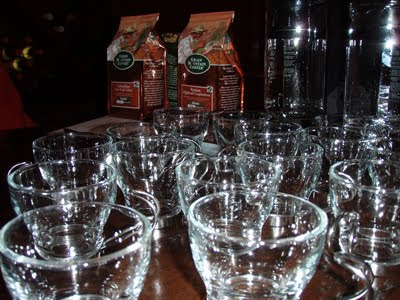 With Blog World Expo going on in Las Vegas, I surmise that writers who had previously committed to the dinner found themselves weighing the choice between slummin’ it in Vegas with hundreds of other bloggers or staying home for a free meal and some potent coffee. As I sit in my living room with a cat by my elbow, I would say they made the wrong choice by missing this meal.

Let’s go through the venue, the concept and then the meal. If you’ve got comments, please share them.

Venue – Tastings Wine Bar is essentially a bistro-style restaurant that until June featured only a tastings menu….hence the name. Its design was created, according to one of my fellow diners, by some of the same people who design the restaurants at Walt Disney World. It shows.

The wine cellar, the bar, the side room (with live music) and the dining room all are comfortable and efficient. Chairs were comfortable, tables were distressed, dark wood, and the staff were all well-dressed and well mannered. 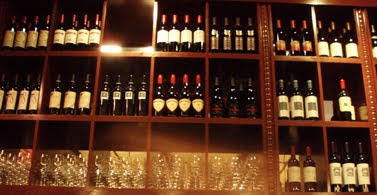 Tastings is a little difficult to locate when you first show up at Patriot Place (the mall that surrounds Gillette Stadium in Foxboro), but there are plenty of signs.

Parking is plentiful and free. Prices at the Bistro are moderate to high. Before we went to the dinner table, I purchased a glass of wine and a beer. That set me back $21 including tax and tip. *Bear in mind that my beer was only $6.

The Concept – The idea behind the evening’s event was to bring influential and interested bloggers together and show them how coffee can be used in cooking some enticing and tasty food. The other goal was to inform these same writers about Fair Trade Coffee and how Green Mountain Coffee Roasters is focused on supporting the Fair Trade movement.

In my mind, it worked.

We finished our meal (menu and descriptions in a second) about two hours ago and I’ve decided to post this before going to bed. That’s because I liked the food, was interested in Green Mountain’s efforts, and had a lot of coffee tonight.

If you’re not sure what Fair Trade really means, check out this site. It essentially says that Fair Trade coffees are held to six principles. These principles allow growers, and the communities within which these growers farm, to lift themselves up – essentially maintaining access to markets where they might not have had an in if demand was the sole determination of pricing.

I liken it to subsidizing farmers to grow corn – or paying farmers not to grow anything – but can see that participating in Fair Trade practices is more than this for Green Mountain. During the meal they discussed how there is an element of corporate social responsibility that helps direct their actions.

Not gonna get all political here, but this whole CSR focus has helped them connect with customers, employees and partners in a way they hadn’t before. 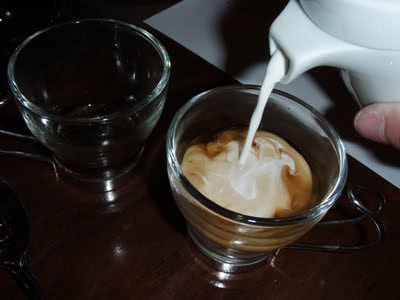 Served in its shell, the sea urchin was pureed and infused with parsnip and vanilla. I gobbled it up. There was coffee used in the puree.

What I tasted most was a spicy, velvety and fresh dish that had just a hint of coffee and a hint of the vanilla. I remember trying urchin as nigiri at various Asian restaurants and this dish had none of the bitterness that sometimes accompanies urchin.

The wine was a Hamilton Russell Chardonnay that brought out the vanilla more after I had a sip. 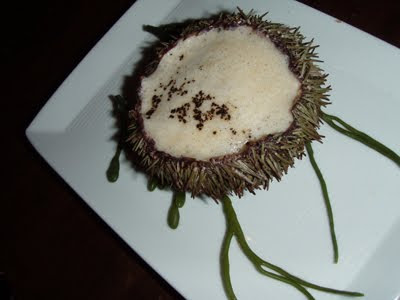 Served on a plate with a vanilla citrette, this dish was by far my favorite. I could have eaten this all night. The subtle citrette and the texture of the fish was perfect.

I’ve had sashimi right off a fishing boat in Hawaii and this was as good. Delicate, tasty and outstanding.

There was just a breath of coffee essence on the hamachi and it was decorated/garnished with a few nuts and leaves. The photos I took don’t do it justice. 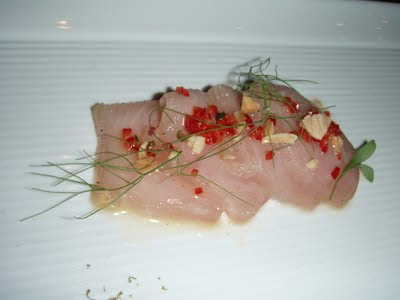 The wine for the hamachi was a Georg Albrecht Schneider Spatlese Riesling. I found it just sweet enough to offset the citrette.

The duck was excellent. I’m not sure I would be able to survive if I had to dine regularly on the portions we enjoyed…but it was a tasting menu. But I digress.

The duck breast was perfectly seasoned with French roast duck jus and was set in a Rhode Island turnip puree.

The puree tasted light and airy and the duck was perfectly cooked. *I was one of the only people at the table who preferred the breast to the confit.

The confit was two pieces of duck that could have passed for mini filets. They were also set in the French roast duck jus.

Ergh. The chef admitted that the dessert was thrown together and it played that way. The dates were done perfectly, but the yogurt & coffee fluid gel remained on everyone’s plate – including mine. It was like a bad Knox blox that tasted like coffee. A mousse of some sort could have been created as easily and would have been a better feel in the mouth.

This was paired with Barros “La Grima” White Port. I don’t know enough about port to know if this was good. It was definitely sweet and had a gentle burn at the end. I’m not positive that it paired correctly with the gel, but as I admitted, I didn’t thoroughly enjoy this course.

Finally, we had a post-meal coffee cupping and got to compare Kenyan and Sumatran coffee from Green Mountain. I can say I’ve never tasted coffee in this manner. Usually I just sweeten it up and load it with cream. This time I took the time to let it roll over my tongue like wine and I noticed flavors that have been absent in my coffee-drinking life.

This wasn’t something I’d attribute solely to the Green Mountain brand, but was pleased to now have a new technique in my arsenal when trying different blends.

What’s the verdict? Well, wow. I was surprised that you could put coffee into so many dishes. I was also surprised by what I learned about Fair Trade items. *Tastings tries to use as many FT products as possible, including vanilla and coffee.

Will the Fair Trade information make me be more socially responsible – if that’s what buying only Fair Trade does? I’m not sure. I’m still going to choose my food by taste and cost primarily. But if I can get the same quality and also do something nice for a coffee grower in Guatemala, then why not.