Food. It’s what Wolfgang Puck creates. And when I say ‘creates’, I’m serious. He’s an artist in a chef’s cap. In fact, the bio on his site is modest when it comes to detailing Puck’s achievements. I think – and maybe this is fueled by my memory of succulent and delicious pork belly – he deserves a medal, or at least a knighthood for cooking the way he does. According to his Website, “Puck began cooking at his mother’s side as a child.  She was a chef in the Austrian town where he was born, and with her encouragement, Wolfgang began his formal training at fourteen years of age.  As a young chef he worked in some of France’s greatest restaurants, including Maxim’s in Paris, the Hotel de Paris in Monaco, and the Michelin 3-starred L’Oustau de Baumanière in Provence.  At the age of 24, Wolfgang took the advice of a friend and left Europe for the United States.” You can see more here.

So, now that he’s back in the United States – and far more mature than 24 years old, he’s still doing stuff pretty well. To that end, I dined as his guest this April at Trattoria del Lupo at the Mandalay Bay Resort in Las Vegas. Let me just show you some photos and give some quick descriptions. You can then rush out and buy tickets on JetBlue or Southwest to Vegas to try this food yourself. The cool thing, according to our representative for the restaurant, is that the chef who prepared our food that night – Chef Eduardo Perez – worked his way up through the system. It’s the same way most of the cooks evolve under Puck. There’s reportedly an average of 20 years experience among chefs and management across the board. And it’s a belief in keeping and nurturing good professional staff. Seems to work.

One more thing, then to the cuisine. In this location there is crazy art all over the place. There’s even an interactive lightshow canvas over the bar that becomes more active the louder the room gets. More conversation, more movement from the lights. Cool stuff by artist David Ryan, a Las Vegas artist whose stuff is shown at the Mark Moore Gallery. 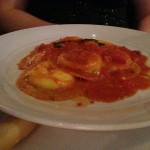 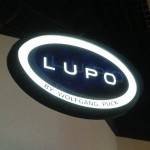 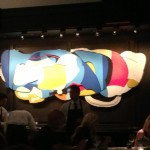 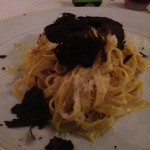 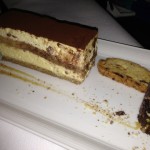 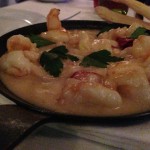 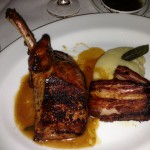 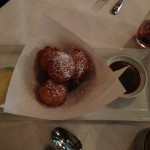 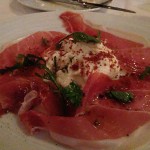 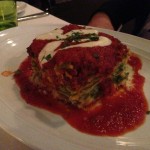 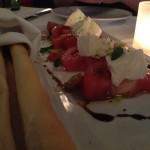 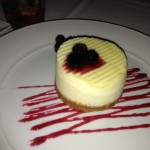 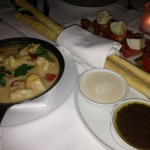 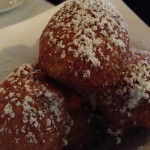 Had the Grilled pork chop, honey-glazed pork belly, apple fennel marmalade, sage natural jus. I also chowed on the prosciutto San Daniele with Burrata Mozzarella. I enjoyed the Gamberetti Saltati – sautéed sweet shrimp with white beans, rosemary, garlic and chili. Then there was the tomato and mozzarella salad (this cheese was unreal).

Oh, did I mention the truffle pasta, the ravioli, the desserts and the beer selection? Yeah, that’s right…it’s off-the-hook, so you better go.

I welcome your comments. You can find Wolfgang Puck on Twitter here.