Annoyed at the Tour de France…. a little

[THIS WAS POSTED ON MY 2010 TOUR de FRANCE BLOG AS WELL – FollowTheTour.com]

Can you say absent? Or abandon? Well, I didn’t quite abandon the 2010 Tour de France but I have taken a long ride in the SAG wagon. You see, the combination of Lance’s diminishing chances for success along with a slew of content-creation projects have had me on the ropes.

Similar to the thousands of miles the peleton has traveled this year, I’m doing the same in the Gulf of Mexico for the next couple weeks. I’m actually watching the 52KM Time Trial from the seatback monitor on JetBlue Flight 401 to New Orleans. 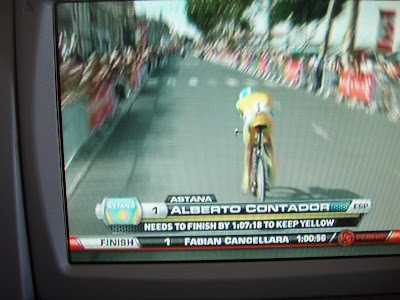 As I type this, both Lance and Levi have finished and all the riders are on the road. Contador sits eight seconds ahead of Schleck after yesterday’s stage and today will tell what happens.

*I have two hours left in my flight, so I suspect I’ll be able to see the end of the stage before I land but this won’t get posted until Saturday afternoon.

What are my thoughts on the 2010 Tour? I’m queasy. I don’t like the fact that Contador is brash and perhaps uncouth when it comes to etiquette. I hate the fact that a cycling hero of mine (and presumably a great many other folks) is going out without a podium visit, looking human. And I wonder if going to Paris every other year will hold the same intrigue for me as it has in the past. 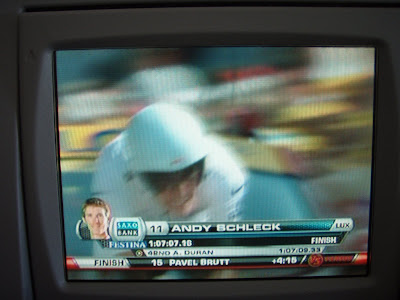 Similar to my baseball addiction of the early 1980s, cycling has been my drug of choice since 1998 or so. But as with our national pastime, I’m starting to not recognize a lot of the player names. George Hincapie might not ride next year. Cadel Evans might retire. Lance is done.

Further, what happens to the cycling opportunities I once chased? Without a lightning rod in the race light Lance, how will Versus maintain its advertising dollars and revenue. People tune in to see US riders. There are some left but few contenders.

Conversely, I would be thrilled to be able to follow the tour on a scooter around all of France. And in doing so not have to fight the crowds that have polluted the last ten years of the race. Ugly Americans being fat on international TV isn’t helping our brand as polite visitors who are there to enjoy a century-old sporting event.

Without competition for hotels and resources, I’ll likely be able to enjoy the Tour as never before. And perhaps bring you readers a more intriguing and fun recount of the race.

Melancholy, they name is the United States’ flirtation with cycling.

Stage 20 is tomorrow. Stage 19 still has about 40 minutes to go. At the end of today we’ll know how the podium looks. I hope Contador’s chain gets stuck for nine seconds and both he and Schleck finish today’s stage with the same stage time. 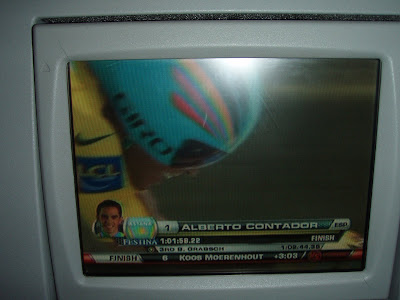 That would mean tomorrow as they ride into France, Contador would have to decide whether decorum or greed and the spotlight are his driving forces. Wouldn’t it be cool to see Schleck ahead by one second starting tomorrow’s final stage?

My fingers are crossed for a good result.